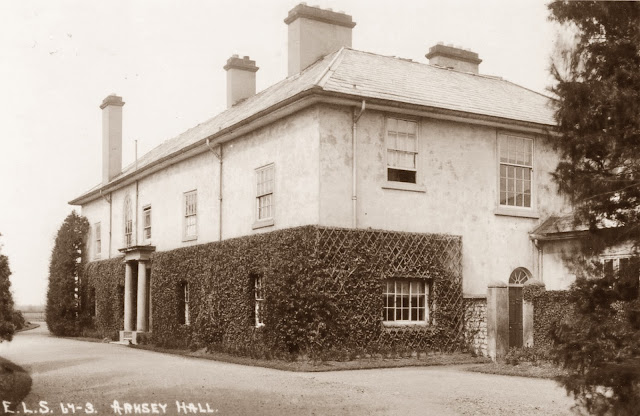 Home Of The Squire


Occupying a large plot of land on Marsh Lane is Arksey Hall. The hall these days seems swamped by modern housing, but it once occupied the whole of the east side of Marsh Lane, with sweeping grounds and gardens fit to hold the most prestigious garden parties. One of the oldest buildings in Arksey, second only to Arksey church, this is the story of a hall which has seen drama, genteel living, industry and institutional caring.

The current building dates from the early nineteenth century but is built around an earlier core, possibly Tudor.

There is an altered 17th century fireplace within the building. It has a lintel with carved Tudor roses and a motto:

Below the lintel is a wooden overmantle with eight lozenge carved panels and the date '1653 / IAC' in triangular-panelled head carved with griffins.

The building also has a nineteenth century staircase and a set of mahogany veneered cupboards.

The Grade II listed building was by tradition, the home of the local squire. It was never used as a manor house, but was lived in by Edward Cooke, Mayor of Doncaster in the 1500's. Later members of this family would be lords of the manor, but lived at Wheatley Hall.

For more on the Cooke family go to Cooke Family History.

The Civil War Comes to Arksey

The Story of Robert Portington

Robert Portington relative of the Barnby Dun Portingtons, lived at Arksey Hall. A Major in Sir William Saville’s Regiment of Horse, he fought for the Royalists in the Civil War at the battle of Willoughby Field, in July 1648.

However, it was at the Battle of Winceby in October 1643, that Major Portington almost changed the course of English history.


At the battle, Portington and Colonel Cromwell were engaged in hand to hand combat, when Portington took aim at Cromwell's nose, and struck a fierce blow which missed the future Protector, and severed his horse's head. Man and horse both rolled to the ground. On rising, Cromwell received a stroke from Portington, which for a short time rendered him senseless.

Some years later, when the two veterans met, Major Portington asked Cromwell if he remembered being dismounted at Winceby, Cromwell replied that he was never in so great a danger of losing his life as he was then.

Following the end of the war and the execution of King Charles I in 1649, Portington returned to Arksey to live in retirement at Arksey Hall. When Oliver Cromwell became Lord Protector of the new Commonwealth of England in 1653, he sent soldiers to Arksey in order to capture and imprison Portington. Warned of this manhunt Portington hid in his hay lofts. Soldiers searched the house and grounds and even thrust their swords into the hay loft at random in a bid to find him. Portington, despite being wounded was not discovered.


Portington was eventually captured and taken prisoner, after which he was sent to prison in Hull and remained there until after the Restoration in 1660. Following his release he was crossing Booth Ferry by boat and, bizarrely, was bitten by a monkey (the exact circumstances are not recorded). He ignored the wound but it turned gangrenous and he died of the infection that same year.
Robert Portington is buried in the chancel of Arksey church, the inscription on his tombstone reads:

“Underneath this stone was interred Robert Portington, a General, a brave soldier and faithful to his prince. He died the 23rd December in the year of our Lord 1660.”


Following the events surrounding Robert Portington there seems to be a gap in the history of the hall's occupants, it's not until 1841 and the introduction of the census that records become easily accessible again, and from these records, taken every decade, it seems that one family, named Chadwick, made Arksey Hall their home for the next seventy years.

The Chadwick Family of Arksey Hall

The Life of the Village Squire

The role of village squire usually entailed choosing the local rector, leasing land to the village tenants and living in the manor house. These tasks were undertaken by William Chadwick, when he and his wife moved into the Hall in 1839.

William Chadwick was born in 1804 in Leeds. His wife, Hannah Batley was born in 1808 in Hipperholme near Brighouse. The couple married in Leeds, in the spring of 1839 and moved into Arksey Hall before the birth of their first son, also called William, on the 6th of September 1839. The couple had two more children, Hannah in 1842, and John on the 21st of August 1843. The 1841 census shows four servants living and working at the Hall, these were Stephen Nettleship, 20, Ann Wilson, 40, Susan Roberts, 23, and Elizabeth Shercliff, 23.

The Chadwicks continued to live at the Hall throughout the nineteenth century. By 1881, William was aged 77 and Hannah was 73. William had previously sold off or leased some land to the Great North Eastern Railway and was supporting his family from the proceeds.

William Chadwick died on the 25th of January 1888 at the age of 84 and Hannah died in 1891, at the age of 83. Following William and Hannah’s deaths the Hall passed to their eldest son, William, now aged 51. William, who was a Justice of the Peace, never married and lived in the Hall alone, apart from his staff.

William's brother John joined the Royal Irish Dragoon Guards and became a Major. He died on the 10th of December 1889 at the age of 46.

William Chadwick jnr has been described as a kind man, who was well respected by the people of Arksey, and had a reputation for looking after his employees well. He used to have a white terrier dog who he took on walks around the village. He knew all the village children by name, and would stop and watch them  playing, giving them a three-penny piece. William also hosted the Sunday school treat at the Hall, which consisted of a tea party in the Hall, and games in the grounds every summer.

In 1901 William Chadwick presented a special chair to Doncaster Corporation to commemorate the accession of Edward VII to the throne. Called the bog oak chair it was made from two oak trees found by William Chadwick in waterlogged ground at Arksey and were believed to be 2000 years old. The trees were estimated to have been around 100 feet each in height, when standing.

The chair was made for the Great Exhibition of 1851 at Crystal Palace and bears the borough’s coat of arms and intricate foliage designs. The bog oak was carved by two craftsmen and was extremely difficult to carve.

The chair stood in the Chair of Council’s Parlour for decades before being loaned to Doncaster Museum and Art Gallery. It was returned to the Mansion House in 2005, but is once more on loan to the museum.

William Chadwick died on the 25th of March 1910. The Chadwick burial plot is in the Old Cemetery on the north side of Station Road. Two of the graves have fallen on their faces and can’t be read; only William’s and John’s are visible.

The grave in photo above reads as follows:


The grave in the photo above reads as follows:


After 1910 the Hall was divided into two houses, one of which was called West Wing. Later in the century, Denbigh’s Cleaners occupied the rear building of the estate. In the early 1990’s the main building was sold and converted into a care home for the elderly. Today it is a specialist care home for adults with complex mental illnesses. West Wing remains a private four bedroomed home.

Please note, all comments now come to me for moderation before publishing. You can also email me at arkvillhistory@yahoo.co.uk for a personal reply.

The village of Arksey lies approximately 3 miles north east of Doncaster in South Yorkshire. It has an impressive history dating back to at least the Domesday Book of 1086.

Alison
Hello, my name is Alison Vainlo. I'm passionate about history and genealogy. My blog sites allow me to share my obsessions with the wider world. Enjoy.